in the Douglas County and Surrounding Area since 1984

Introducing the Air Scrubber by Aerus 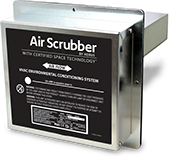 People are more concerned than ever about being exposed to mold, allergens and air pollutants, and for good reason. As our atmosphere grows more polluted and new viruses develop, the number of us affected by respiratory issues continues to rise.
The Air Scrubber by Aerus utilizes a patented technology called ActivePure that goes beyond typical air purification by not only eliminating odors and dust, but actively eliminating harmful contaminants from the air.
ActivePure® Technology has been tested in a variety of settings and has been proven effective in reducing bacteria, viruses and other pathogens on surfaces and in the air in university and laboratory tests. These tests have shown that ActivePure is effective against DNA and RNA viruses like these: Swine Flu (H1N1), Avian Bird Flu (H5N8), Hepatitis A (HAV) and MS2 bacteriophage. (NOTE: ActivePure has not yet been tested against the COVID-19 virus.)
The Air Scrubber by Aerus attaches inside the ductwork of your existing HVAC system and can be installed by any of our certified technicians. Installing one of these devices into your home is one of the easiest ways to protect your family from environmental hazards.
Give us a call today at 303-841-9383 to learn more!

"Since Colorado Gold installed our Air Scrubber, we’ve had no illnesses and, so far, no allergy symptoms. My basement no longer smells musty and, despite living on a dirt road, there is notably much less dust floating around the air and on the furniture. As a bonus, strong cooking odors as well as our unfortunate Jack Russell Terrier odors are no longer lingering around!”
– Connie T., Sedalia